Why should Wall Street be worried about the rise of blockchain?

Blockchain technology has been, for some time now, one of the biggest stories in financial news every year. Beginning with the pioneer of cryptocurrencies, Bitcoin rising and sustainedly oscillating the $10K barrier this year, the announcements of big brands adopting crypto along with blockchain and integrating tokens as a service to their existing business models and also the technology’s integration on platforms outside of currency and trading. As Blockchain’s popularity grows, innovations and new types of currency are emerging from the shadows.

All of this drive has pushed investors and fund managers to flock blockchain for the FinTech sector and making the technology nearly mainstream.

But blockchain, the automated encrypted distribution ledger system, is more than just something to drive digital assets. Now, outside of investing and currency exchange, Blockchain technology is being used in record keeping, entertainment, large banking companies and even logistic-centered projects are getting in on the action to use the technology in creative ways. That’s why financial experts, professional investors and Wall Street as a whole, need to pay attention and embrace how the times are changing.

Crypto capital markets, even though very young still, are significantly challenging the supremacy of traditional investment banks for fund raising and venture capital. Just on the second quarter of 2018 we saw a staggering 45% of the amount raised by traditional IPOs (initial public offering) go to NAOs, which has greatly disrupted investment banks.

Put simply, an ICO or Initial Coin Offering is a way for a company to raise funding by selling—sometimes for a discount—the rights to receive a product or service that will be available for use in the future. Or to further summarize, is merely capital raised on open blockchains via new asset sales. If such transactions occurred in a traditional capital market it would be known as “secured financing” or “securitization”—and at its core, there’s little difference between an ICO, a secured financing or a securitization since they’re non-dilutive and the investor can first trade its claim for cash in secondary markets or, secondly,  redeem it for the underlying asset.

Just on last year’s 1st quarter, the ICO market represented 40% and 30% of the traditional IPO and venture capital markets, respectively. This went up to 45% and 31% on the second quarter, taking the ICO volume that half of last year to approximately $7.2 billion.

This was done due to the ICO market lack of demand for covenants or preferences from issuers. Also, its investor base is global and retail, attracting a new, far broader pool of investors. In conclusion, incumbent investment banks still remain fairly absent from the blossoming cryptocurrency investment markets and may increasingly lose customers to them.

Another sizable loss for traditional banking at the hands of blockchain is one of its most exciting applications, the capability to enable secure financial transactions in a radically different way compared to legacy financial systems such as digital remittance services and credit card traditional payment processors. More and more, the mass adoption of blockchain technology has turned digital assets into viable currency.

Right now, the digital asset market is worth around $500 billion. Yet, adopters are still faced with limited ways to spend them. The market is demanding, and in turn moving, towards integration. There are already some projects that aim to make this a reality, but the current payment processor models have proven difficult to completely migrate to blockchain sensibilities. Even if the most viable way to achieve complete adoption of crypto payment doesn’t rely completely on a current model integration, these efforts shouldn’t be taken lightly by Wall Street, since the adoption curve keeps growing.

And why? Well, that takes us to the other biggest upside for using blockchain technology: system integrity. Not only on payments or currency but in any system that is applied, blockchain technology effectively eliminates the need for middlemen. Which means, the overcomplications of current payment models and expensive fees on top of large transactions are, for the most part, becoming a thing of the past.

Like we said before, blockchain is a decentralized ledger. Therefore, any transaction occurred in the blockchain is not visible to any person besides the two parties participating in the asset transfer. Also, by design, blockchain compliant wallets are highly immune to fraud due to their complexity and uniqueness. This makes the very design of blockchain to lend itself to security. Assets become extremely difficult to steal and are essentially invulnerable to forgery.

This has led to an increasing preference for them, and even though these blockchain-based assets have been unable to scale for mass adoption, at times, their daily trading volume can reach up to $200 million. If we add up blockchain’s applications in cross border transactions, things get very interesting for those within commercial finances. One of the main advantages over fiat currencies is the ability to send assets internationally and globally, without any fees.

This makes money transfers able to be conducted between any two locations in the world between two users that just need a connection to the Internet.

All of these aspects have led large banks to develop infrastructures to support the new assets and payment systems that are blockchain-based. This is necessary to simplifying the payment transition from traditional to traditional and blockchain. The result this may carry will be beneficial and instrumental for small and medium companies worldwide.

Of course, this also brings the benefit of fully going paperless and eliminating the need for brick and mortar establishments to verify and certify each and every transaction. Accounting services are bound to be heavily affected by blockchain adoption as well.  Banks in turn, will become faster, easier, and cheaper for their customers.

Talking about the effect on accounting, another of blockchain’s interesting application that Wall street should watch out for is the potential to offer systems where transactions can be automated to optimize process, whether it’s a finance or logistics system. This is achieved by specifically using embedded smart contracts on the ledgers. With this technology, financial institutions can automate process such as collecting insurance or mortgage payments. This automation can be made available to users as well, resulting in higher percentage of on-time payments and consumers could also spend less time organizing their finances in general.

Blockchain technology growing in popularity is a trend that doesn’t seem like it will go away anytime soon. Its applications are already poised to affect all industries and some, already developed, have attracted a significant number of investors and financial institutions. This is foreseeable, since it’s the financial technologies sector, the one to gain the most immediate impact from blockchain innovations.

These recent frenzies of funding and support for the industry is breeding smarter blockchain networks, better financial assets, and improved development infrastructures by a few companies and groups.

One such company, a holding of a consortium of fintech companies really, is actually taking the forefront in ushering the new era of finances ahead of the projected expectations. With an aim to completely disrupt the financial landscape in a global way; they’ve created a new type of investing instrument, never before seen. A New Asset Class, if you will. One that’s designed to have intrinsic value but at the same time be completely liquid and function as a transactional currency within a stock trading market that, for the first time, will be completely global.

It’s no secret that blockchain technology has the potential to shape the financial industry on this next decade. And with exciting new players, such as the FinTech holding we’ve been telling you about, the future is looking brighter than ever.

Wall Street should definitely start paying more attention to blockchain technology and this holding. And so, should you.

If you’re keen on getting early in ambitious, sound and innovative projects that will create high entry-level barriers for its existing and emerging competitors, you’re going to want to follow the link below and keep learning about this one-in-a-lifetime opportunity. 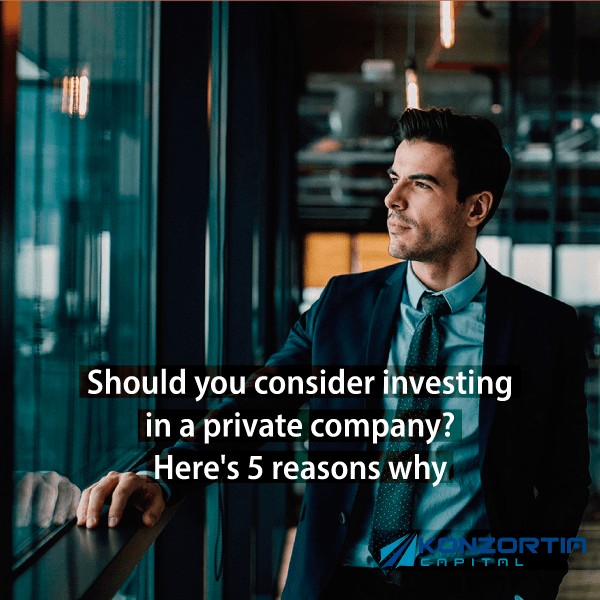 Investors Pick: 5 Reasons You Should Consider Investing Into a Private Company

Investors Pick: 5 Reasons You Should Consider Investing Into a Private Company Most of the time, investors of all skill levels and wealth tend to trade in public stocks because it’s easier to do so. Companies doing a pre-Initial Public Offering (IPO) or an IPO tend to be the ones that are looking for investors [...]