Have you heard about the latest and greatest thing that’s come out in the fintech world? Right now, there’s a company out there called Konzortia Capital that’s been creating a lot of waves lately with their latest use of blockchain technology!

Previously, most blockchain applications have been used in a very closed scope. If you’re someone who keeps up on technology, you might have heard about it in the news or through various other sources. But what started as an experiment, has quickly spiraled out as different applications of blockchain have been forked, reworked, and issued out in many ways. Now, outside of investing and currency exchange, blockchain technology is being used in recordkeeping, entertainment, and large banking companies. Even logistic-centered projects are getting in on the action and using the technology in creative ways.

However, despite all of that, blockchain has for the most part been pretty much the same since it was first created in 2008.

So, what does Konzortia do that’s completely different, and even revolutionary? Imagine owning an utility token, that also works as a security token.

For the non-initiated, a token is an asset or a unit of value issued by a company. Usually, tokens are issued when a company launches an initial coin offering (ICO) that works more or less like an Initial Public Offering (IPO). The difference between an ICO and an IPO is that in an IPO you receive stock in exchange for the investment you make while in an ICO you receive a token in exchange.

With an utility token you gain access to an ICO’s platform and you use it to spend it on said platform and its offered services. For instance, an online video game service that lets you play once you pay a certain number of tokens that you previously bought, before or after the project’s ICO; ergo, a closed environment transaction tool. They merely enable users to interact with a company’s services.

A security token is one that’s backed by real world assets, and therefore subject to federal laws that govern securities. It’s intended to represent shares of its issuing company. This type of token only functions as a saving instrument since it pays some form of dividends in the form of additional coins every time the company issuing the tokens earns a profit in the market. They are investment tools and users holding them also get ownership of the company.

With Konzortia Capital’s revolutionary type of token, a New Asset Class (NAC) really, you can use it as transactional currency within the platform’s applications for crowdfunding, trading, global banking, as well as a savings/investment instrument that gets yearly dividends since it’s backed by shares of the holding of a consortium of fintech companies that have been developing these revolutionary blockchain applications. This amazing asset is called Koura (KOU) and it utilizes the Ethereum platform for its development. Ethereum is an open-source programming platform designed for distributed ledger keeping, as well as smart contract capability. With the use of Ethereum, a proof-of-work algorithm is also enabled, and the inclusion of proof-of-work and proof-of-stake in the Koura platform enhances the level of security available for users.

Our New Asset Offering (NAO), which is very similar to an initial token offering, benefits from the ability of Ethereum to perfectly handle decentralized transactions alongside an eﬀective contract system since Ethereum can process 20 transactions per second, which is far more than the capability of other networks.

Koura is an ERC-20 reward, which means it is an active contract that implements the ERC-20 forum requirement. The Koura allocation uses the active smart contract standard which ensures that all token allocation remains unchanged.

This sounds amazing, doesn’t it? This is exactly what Konzortia Capital is offering with its Koura asset. With Koura, you get all of the advantages of a security token without the limitations, and on top of that you get all the functionality of an utility token: virtually no drawbacks. This company is rapidly growing and making their presence known throughout the financial and cryptocurrency world right now as we speak.

This is not just a great opportunity for investors who want to diversify their portfolios, but with our bounty campaign, access to this unique opportunity is available to hunters interested in backing an innovative and promising project with bold ambition to change the landscape of fintech industries with guaranteed rewards as soon its NAO is completed. Konzortia Capital has a bright future ahead with a great team of experts who are extremely passionate about their work and about the groundbreaking vision they’re creating.

In fact, getting in on the Konzortia Capital bounty campaign is extremely important for any hunter worth their weight in salt. Konzortia is poised to possibly become the greatest company of the 21st century by birthing Koura, the currency of the future.

If you feel you have what it takes to participate in their vision, check out their campaign and see for yourself all the interesting work you can contribute to and the great rewards awaiting. Click the link just below and find out more. 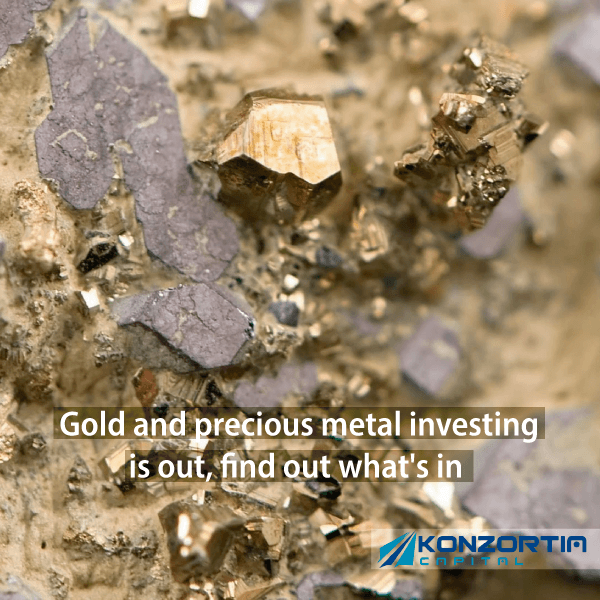 Gold and Precious Metal Investors are investing in These Emerging Industries.

Gold and Precious Metal Investors are investing in These Emerging Industries. Gold and silver have always been a very reliable industry to invest in. It makes sense since for thousands of years the economies of nations, kingdoms, and empires have run off of the back of silver and gold, and even today there are a [...]